“We empower people to believe in themselves and in what they can achieve with both hands.”

There is a little place in Sofia called the Sofia Bread House. Since it’s establishment it has brought about some changes in the community, but there are always challenges to overcome. Meet Maria Grigorova, the lovely and ever-smiling coordinator of the Sofia Bread House, one of the bread houses that are part of the Bread Houses Movement. We talked about the challenges and changes in Sofia, what inspires her, and what we can expect in the near future. 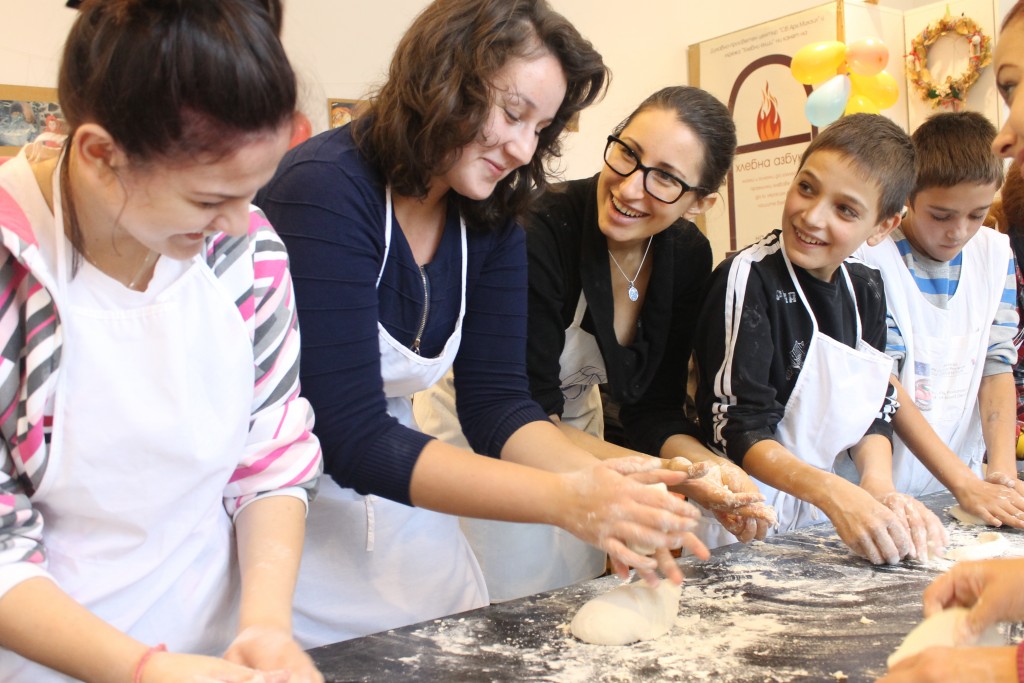 How did you get involved in the Sofia Bread House?

“Well, me and Nadezhda, the founder of the Bread Houses Movement, have been friends for a long time. When we were both traveling I was following what she did with the bread houses already, so when I came back to Bulgaria after my masters abroad, it kind of happened organically.”

“You can’t compare it day by day, because we have so many things to do and they’re very different. Sometimes I write project proposals because a big part of our funding still comes from projects. It could be project proposals on Monday, and on other days, groups, or kindergartens and schools visit us, or we do bread therapy with rehab centers. Then the next day I do the website and write articles, so it’s a really dynamic job. I am also developing the business side of the social enterprise, which is our core. We want to be an NGO that adds value but that can also can sustain itself, so for us it’s important to develop the business part. A substantial part of our funding will finish next year, so we need to make sure we can support ourselves and offer the things of social value for free. So it’s an important year.”

What are the challenges and obstacles that you face in Sofia?

(Laughs) “Well, the bread house is also a social bakery, so my office is pretty noisy. We have managed to establish ourselves within the community in Sofia and in our neighborhood, but that’s been a challenge. We had to explain to them that we are a social enterprise and that we have weekly events and workshops. Sometimes people would think that we were just a club for kids because we had schools visiting. But in the end, I think we managed to achieve to establish ourselves more or less. Also, in Sofia, you don’t really receive support from municipalities. Some other municipalities gave a space, but here we really had to do it ourselves and make the Bread House into a social enterprise to survive. You know, paying the rent even. Another challenge is spatial. Sofia is so big, that it’s hard to connect people on the ground. It’s hard to fully achieve this sense of integration when people in a wheelchair are hard to be transported to the other side of this big city, though we want them to be an integral part of the community.”

How does the community receive this new way of coming together?

“Our whole atmosphere is very inclusive; bread breaks borders automatically. Baking bread really connects different people around the same table without any tension. It’s really incredible; I’ve seen it over and over again. I’ve seen a grandma who came along with her grandson. In the beginning, she was really reluctant, but in the end she was kneading bread with this Brazilian guy and even though they couldn’t talk with each other, they were helping each other out.”

What is the main transformation in the urban environment or community that you see?

“The community aspect is most important to us because we physically have no impact on the urban environment. Our main focus is on people and community building. This actually kind of happened in a way; our location is good and the house is really becoming a community thing. People celebrate the birthdays of their kids here and partake in our events. Now, customers of the bread are even starting to come to us and offer ideas or ask to use our space. They have the feeling that the space now also belongs to them. It’s is amazing that people don’t just come and go but really think of this place as theirs in a way. That’s really transforming for me considering that this is not the normal approach in general for our country. It’s not how we usually consider a space outside our home. Normally you just come and go. For us, community places are very small and don’t happen often, but here it has become a community center.”

“Many times, people are hesitant and closed in the beginning and at the end are the lead singer of our kitchen music. These things happen all the time.”

Are you inspired by other projects?

“Something we based our methods on and were inspired by is Patch Adams, a clown therapist. There was a movie about him: a doctor worked in a hospital saw that kids improved better when they laughed so he started laughing therapy with children and clowns. Nadhezhda got really inspired from meeting him in a conference. We are also inspired by ‘Dialogue in the Dark’, an initiative from Hamburg. It’s a well-structured social enterprise that has workshops for sighted people to experience the world through the eyes of blind people. You enter a dark space and they walk you through different steps. We are partnering with them to do Bread in the Dark, when you bake bread in the dark. Hopefully, we will be able to darken part of our space soon so we can start. The workshop will be led by blind people.”

When did you see that the Bread House really works?

“One time we had a visit from a school, and there was one kid that didn’t want to participate, he was so shy. So then, Milena, my colleague sat down with him and gave him some dough and he made a whole sheep out of it. He was very proud of what he did, and everyone else really appreciated his work. You see, you don’t get to make it by yourself and eat it by yourself, everyone else appreciates each other’s creation and then we all share. We empower people to believe in themselves and in what they can achieve with both hands. You just need your hands and some simple ingredients. Many times, people are hesitant and closed in the beginning and at the end are the lead singer of our kitchen music. These things happen all the time.”

So what about the future?

“Well I already told you about the Bread in the Dark, and currently we are also promoting our board game called “Bakers Without Borders”, which is non-competitive. You just play. We always try to stress the community aspects and make people think about changes to make in their own environment.”