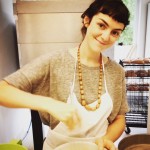 I have been asked to write about my time here in Sofia, at the Bread House, and what exactly brought me here in the first place. It all came to be very serendipitously actually. I have been living in Wellington, New Zealand for the past two years, living and working as a baker at a little organic grocery shop. Originally, I am from the United States and after not seeing my family and friends for a couple of years, I decided to go back for an extended visit, followed with more travel! My initial idea was that I would leave New Zealand at the end of April, be in the States until August and then I would travel to Greece and Serbia with a close friend of mine to go to a Balkan Music Festival in Serbia. That would be the main reason for my trip; but also, I would travel around Europe for a few months, particularly Eastern Europe where I have never spent any time before.

After doing so much travel in years past, I decided that I didn’t want to just be a tourist. I wanted to make sure that somewhere somehow I was volunteering or working with an organization that allowed me to give back to the local culture. So while I was home in the States, visiting with family, I also looked into possible volunteer opportunities through the Slow Food network. I am a big supporter of Slow Food and everything that they do. I really believe in preserving traditions and community through food and supporting local farmers and makers of all kinds. And being a baker myself, I lean towards organic and natural ingredients and methods whenever possible. So by happenstance, I stumbled across a link to a Bread House in Gabrovo, Bulgaria. Which then led me onto discover the whole Bread Houses Network and the concept of ‘Bakers without Borders’ that was created by Nadezhda. I had been looking for a way to give back and was surprised to find an organization through Slow Food in the Balkan area (where I was already planning to be) that specifically uses baking as a means for making a difference. I met with Maria, Kiko and Stefan from Bulgaria over Skype and found out that not only do they run a Bread House here in Sofia, but also that they are working on developing a ”Bread in the Dark” program here. A baking experience that combines people with blindness and sighted people in making bread and then enjoying it together in a totally darkened room. This was the final step in all of the serendipity- my mother, from whom I learned everything I know about what to do in a kitchen, cooking, baking, etc. – is blind. She is an incredible cook and feeding people has always been her passion. I grew up in her kitchen, familiar with all of her talents and strengths despite her lack of vision. So, what originally planned to be a trip to Serbia for a Balkan music festival actually morphed into me coming here to Sofia to pursue the projects at the Bread House with a new passion and inspiration for how baking can be a transformative social tool.

Now I have been here in Sofia for almost two weeks! I was greeted by Maria and Kiko, Stefan and Nadezhda from the Bread House with such warmth, love and gratitude. In the first week I spent a lot of time working on some new recipes with Kiko and Stefan. They are the two head bakers at the Bread House. The four types of sourdough they are producing are beautiful, all made with local flours and honey and one of the strongest sourdough starters I have ever seen. But when it comes to cakes, cookies and other pastry specialties, they needed help. Together we created a few new products: a cake sweetened with honey and made from local Einkorn flour, called limetz, which is a grain similar to spelt; lemon rosemary shortbread cookies; lavender yogurt cake made with the incredible Bulgarian yogurt; and Banitsa, a traditional cheese filled pastry that is sold in every bakery around Bulgaria yet is usually quite processed and unhealthy. Stefan and Kiko created a whole grain banitsa, using all locally made cheese and butter.

I graduated from Loyola University in New Orleans with a BA in Studio art. I illustrate and draw, as well as bake for a living, and have always loved creating in all of its forms. So, here at the bake house they have also found some illustrative duties for me too! Seriously, never have I been able to combine all of my skill sets so well. Now, we are working on an interactive game related to the global initiative of the Bread Houses Network “Bakers Without Borders”. The game allows both children and adults to create the ideas and framework for what it takes to make a Bread House. This week I have been able to work with a wonderful designer, Nadya Andreeva, on the design of the game before Nadezhda takes it to a World Bread Conference in Vienna next month. Then, I am going to the Slow Food Cheese festival in Italy in September and hopefully taking a prototype of the game along to that as well.

On top of all of this great productivity, my partner gets to join me here in Sofia at the end of the week. A very talented and inventive traveler himself, we want to work on a creative project with the city of Pleven, Bulgaria (2 hours north of Sofia) that happens to be sister cities with Charlottesville, Virginia where Rob, my partner, is originally from. Crazy coincidences all pointing at this being the right place to be right now.

Just being a foreigner in Bulgaria is interesting in itself. A combination of post communist structure mixed in with old beautiful Austrian architecture. Flower shops and little tobacco/liquor/coffee shops litter the streets. The smells of the city- faint sour smells of beer and cheese, perfume, dill and roasting bell peppers. Big green parks between large concrete buildings, old palaces with green and gold. My second night in Bulgaria, I was invited to go with my couchsurfing hosts to camp outside of the city to watch a meteor shower. I must of seen at least forty shooting stars within a couple of hours, enjoying beers and conversation with new friends. This night I took as a magical omen and introduction to this new experience.

The first day I came to the Bread House, I took the bus in the wrong direction and ended up spending four hours trying to find the bakery. With the help of a very sweet bus driver and some locals who could not speak English but were trying their best to help anyway, I finally made it there, where Maria greeted me with lunch which included the best tomatoes I have ever tasted. I think now in my second week that I have gotten over my bus fears (have not been lost since!) and am getting used to the norms of day to day life – how to order coffee, how to ask for half a kilo of figs at the market, finding new parks to walk through, new cobblestoned streets to explore. And already I have made a few friends as well, everyone here being so welcoming and kind, excited to share their culture and lives with me.

So, this is where I am right now. Baking, drawing, eating, exploring, and connecting. And ultimately becoming part of an organization that is doing work that I want to learn from and take on with me in my travels, and eventually who knows – one day open my own Bread House wherever I finally end up.

3 thoughts on “Tales of a Baker Without Borders in Sofia”